About the TCO18 Bangalore Event

The TCO18 India Regional Event will take place on Saturday, July 21, 2018. The event will be hosted at the Amrita School of Engineering, Bangalore. 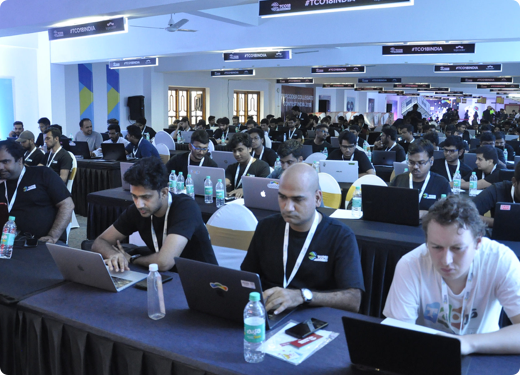 The event will include a Development Competition, Design Competition and Single Round Match (SRM) style Algorithm Competition that could lead you to the TCO18 Finals! The event will also include some fun competitions and learning opportunities for designers and developers. Also, Design admin [adroc] will be in town to meet members in person.

The event will also allow you to mingle with other Topcoder members in your area, meet some cool sponsors, and get you a Topcoder t-shirt!

What are my transport/parking options in getting to the event?

BY ROAD:
Bangalore is well-connected by a network of buses from cities like Goa, Mumbai, Pune, Coimbatore and Mangalore. The options range from regular buses to air-conditioned, Volvo and sleeper coaches. While some of the buses are run by Karnataka State Road Transport Corporation, there are also a number of private bus operators who run inter-city buses to and from Bangalore.

BY TRAIN:
Bangalore has two important railway stations – Bengaluru City Railway Station and Yeswantpur Junction. Both railway stations have regular trains running from Delhi, Mumbai, Pune and other major cities. For travelling within Bangalore, there is Namma Metro (with limited connectivity), which is an intra-city rail network set up by the Bangalore Metro Rail Corporation.

BY AIR:
You can reach Bangalore via air at Bangalore International Airport which is located at a distance of 40 km from the city. From here you can take prepaid taxi services and bus services to reach the city. Many national and international flights lands on this airport making approachability of the city easy.

What competitions will take place at the event?

The event will include a Development Competition, a Design Competition and Single Round Match (SRM) style Algorithm Competition that could lead you to the TCO18 Finals! The event will also include some fun competitions and learning opportunities for designers and developers. Also, Design admin [adroc] will be in town to meet members in person.

2018 Topcoder Collegiate Contest India Finals – will be held during the event.

What can/can’t I bring to the event?

Bring your laptop and a photocopy of a government authorised ID to the event. (Driving License / PAN Card / Aadhar Card etc)

What if I’m not a Topcoder member?

Becoming a Topcoder member is easy and free. Best to register as a member before attending the event so you can take part in the competitions. Go here to register.

What kind of prizes will there be at this event?

All every attendee gets a rad t-shirt. Each competition has prizes and goodies attached to it.

Plus you could win a bid to the exclusive TCO18 Online Algorithm Wildcard Round which could lead to the TCO18 Finals in the USA. Top 10 from TCO18 India Regionals Algorithm Round will qualify for wild card round.

Why should I attend this event?

If you’re an up and coming programmer or want to become a professional software developer, being a part of the Topcoder community has immense value. Attending this event gives you networking opportunities for a potential job or internship. Did you know some of the top tech companies encourage their applicants to get a Topcoder rating or at least share their rating during job interviews. Plus you’ll have access to the largest worldwide developer and design community and all there is to learn from them.

The name on the registration/ticket doesn’t match the attendee. Is that okay?

That is fine, but only one person per ticket is allowed. Reach out to us at least 3 days before in such case.

Do I have to bring my printed ticket to the event?

Yes it is mandatory to bring the printout of the Eventbrite email containing the order number, along with the confirmation email from topcoder.

Where can I contact the organiser with any questions?

You can contact us by asking questions in the forum or drop an email to tco@topcoder.com.

Check Out the Great Photos