Congratulations to our TCO18 Marathon Champion,

About the Marathon Competition 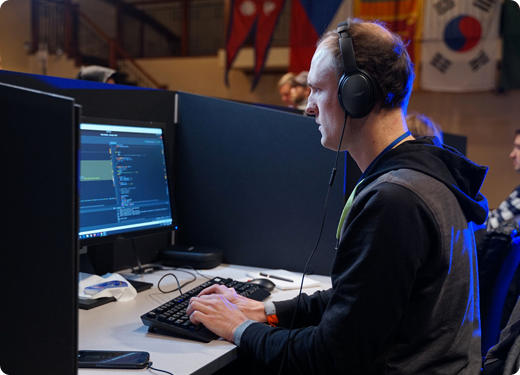 Every eligible participant who registers for the competition will be able to open the problem statement at the same time.

Unlike traditional algorithm competitions, the system is not necessarily testing for correctness. In the Marathon Competition, the scoring mechanism may be different for each problem.

There will be no explicit registration required to compete in the Marathon Competition; however competitors must be a Topcoder member.

The schedule for the Online Rounds of the Marathon Competition is as follows:
All times listed in UTC -4

The winner of each match [among those eligible, who have not already otherwise advanced] will automatically earn a trip to the TCO18 Marathon Match Finals.

After each Online Round, up to 30 of the next-highest scoring competitors [among those eligible, who have not already otherwise advanced] will be awarded points based on the following table. To get points for the round, a Competitor must submit a Full Submission and achieve a score greater than zero. If several competitors are tied for a place, they share points for the tied places (i.e. if two competitors are tied for 6th place they’ll each get (40+36)/2 = 38 points).

After each Lightning Online Round, up to 10 of the highest scoring competitors [among those eligible] will be awarded points based on the following table. (Note that, unlike the regular online rounds, winning a lightning round does not guarantee an automatic advancement to the finals)
Eight (8) Competitors who will accumulate the most points during all Online Rounds will advance to the onsite Championship Round.

NOTE: In the event of a tie for any advancing position during the Online Rounds, the tie will be resolved in the following manner:

In the event that a Competitor who has advanced to the onsite Championship Round is unable to attend it, Topcoder may choose to replace this Competitor with another Competitor or to take no action in this regard (thus reducing the total number of onsite Competitors). The choice is made at Topcoder’s sole discretion. In case of replacement choice, the right to attend is passed to the next Competitor who have accumulated the most points during the Online Rounds.

** To get the prize, Competitor must have positive points after Online Rounds. In the event of a tie in for the 150th place, all competitors with that score will earn a t-shirt.

These rules may change with or without prior notice.